Ernest
ERNEST: In 1967 when I was 9 years old I was chaperoned by a stewardess on the plane from Barbados. I arrived in November and there was snow on the ground. I hadn’t seen snow before. I remember it as if it was yesterday. They had put my name on a big board. My mother came over and then had to prove that she was my mum. I hadn't seen her since I was 3 months old. I hated her, I wanted to go back home.  Although I knew that I had come to a better life, I wanted to go back home. I was leaving my friends, I was leaving my home.

Max
MAX: I was born in Barbados. I was recruited for the British Army in Barbados in 1962 when I was 18 years old. My brother who was younger than me joined the Barbados Regiment and he then came over to join the British Army.  I arrived in London and then went on to the barracks in Pontefract. When I woke up the next morning there was fog.
When I came to England I  thought there was quite a lot of factories in London. I didn't know they were houses with smoke coming out from the chimneys.﻿

Winston
WINSTON:  I came over from Jamaica in 1963 when I was 9½ years old with my sister who was about 1½ years younger than me. We arrived in a BOAC plane at Heathrow. I ran back on the plane. It was that cold. It wasn't snowing but there was snow on the ground and it was that thick and heavy and white. I ran back on the plane and the stewardess said, "Oh no young man, your journey finish here".
Friends of my parents who I didn't know at the time picked me up at the airport and took me to their house. I didn't know where I was. When I came here everything was strange to me. I hardly knew    my parents. 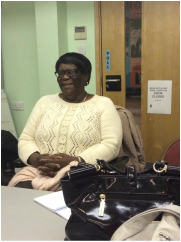 Valerie
VALERIE: I came by boat in March 1966. We arrived in Southampton March 1966. They showed us, on the boat, pictures of England with the people and the houses and everything. There were lots of people on the boat from Dominica, Grenada, St Lucia and Jamaica.

I remember going down the road one day and there were little stones coming down and I was frightened and ran and sheltered. Someone said “That’s hailstones."
I got to understand the place and the people.

One day I was at the bus stop and I said "Good Morning" to the lady and others standing there. They all looked at each other as if to say, “Who is she talking to ?”, so I got frightened. They didn’t answer me so I thought “It’s not like home."
Powered by
Powered by