MUSIC & WORK
During the week my parents borrowed money from me. On Thursdays they never had money to go to work. The main employers would be Lyons Cadby Hall, The Lucozade Factory and The Metal Box Company in Alperton.
THE CHURCH
SCHOOL, SPORT AND THE LANCASTER ROAD BATHS

BARBARA: I was born in Powis Terrace. When the Second World War started my father joined the army and my mother and I moved to Bravington Road, where my mother was born. I moved back to the North Kensington area with my husband Andre to St Stephen's Gardens in the late 50s where my 2 children were born. (LANDLORDS).
ANDRE: "He was born in British Guyana. He was in the RAF during the Second World War. He came to the UK, London when he was about 20 years old. After the war he decided to stay." Barbara met Andre in Ronnie Scotts in 1955. After a period of time they moved in together at St Stephen’s Gardens. After a couple of years they were married in Harrow Road Registry Office.
They remained together for 43 years until he died in 1998. "Andre was very well known and respected in the area". 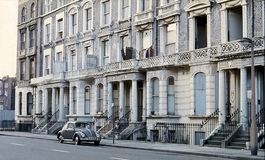 St Stephen's Gardens
LIVING IN THE AREA AS A MIXED RACE COUPLE
I got no stick from the black community. There were very few black women so most black men had white girl friends in 1956, 57 and 58. I suffered verbal from many white men, young, white boys especially.
One of the Portobello Road market stallholders verbally abused me for having mixed race children. In Lyon’s corner house with Andre queuing for the teas, a lady tapped me on the shoulder. “Excuse me dear I saw you come in with a black gentleman. May I ask you, does the colour come off?” To her it was a genuine question, she was elderly and probably had never seen a black man before.
Andre was too intelligent to let racist comments bother him. England was his home now.
Powered by
Powered by