PEPPER POT: THE STORY OF HOW & WHY THE PEPPER POT CENTRE STARTED

Bridget Davies
BRIDGET: I came to London in 1958. I decided to do a Diploma in Sociology and in 1966 one of my placements was at the Citizens Advice Bureau which was at that point in Ladbroke Grove on the corner of Elgin Crescent. I thought that it was going to be a terrible place and I was going to be bored stiff with lots of old ladies doing good, but in fact I completely fell for it.

There were three advisers and me as a student for about 6 months and Pansy Jeffrey doing community work, which was actually quite dangerous when she did home visits. Some of the West Indians were having a hard time getting work and the housing conditions were not good. After the riots Pansy had been appointed by the Kensington Citizens Advice Bureau as a Community Worker. She came from Guyana in about 1952 to train as a nurse. Pansy was also very much involved with the beginning of the Notting Hill Housing Trust and the North Kensington Law Centre which was the first in the country.
(The North Kensington Law Centre in Golborne Road was the first one in the UK and formally opened its doors in 1970: John O'Malley)
When I finished my course I was away a lot, however when I was in London, I would go to help at the CAB between 1966 and 1976. I then went to live in France for four years and when I returned in 1980 Pansy offered me a job, helping her as her deputy. The Community Service had grown in size and influence. I started work on the 4th April 1980 and stayed for 13 years until I retired.

THE START OF THE PEPPER POT IN THORPE CLOSE
﻿
The CAB moved from Ladbroke Grove to Thorpe Close in 1972. The Community Service had one room divided by a partition which was where the Pepper Pot kitchen and dining room are now. There were many people who had come after the war and were beginning to retire by 1980. They were the first generation of retired people from the West Indies.
We thought that we would provide something for them, so we started making soup once a week. We also thought that they would like to do some handicrafts.
Enid, one of the retired Caribbean ladies made the soup with meat and vegetables. Pepper Pot started with about half a dozen people and then grew so we moved from the two small rooms  into the large hall at the entrance to the CAB in Ladbroke Grove.  With increased demand we realised that people needed more than soup. We were offered the use of a larger kitchen at St George's Church Hall (Campden Hill). Enid and Gloria Williams prepared the food there and it was then transported to Thorpe Close in the van.

We then grew out of the Thorpe Close premises so we moved into the community space in a new block in Acklam Road which was offered to us by the GLC. We had three rooms on the first floor but the lift was often out of service. There was great excitement when we went to a meeting at County Hall when all the details were passed and they agreed to finance us and a vehicle as well.
We used the vehicle to bring people to the Centre and we went on expeditions in it. I was in charge of expeditions so I would drive groups to France, Brighton, Southend, Hastings and various other places.
We were in Acklam Road about ten years until the 1990s. It was always thought, because of the stairs, not particularly suitable. We needed more space so we moved back to 1A Thorpe Close London W10 5XL where Pepper Pot is now.

Ruth Morrison is the Director of The Pepper Pot Centre.

BARBARA: I worked at the Citizens Advice Bureau, CAB.
Pansy Jeffrey who, like my husband Andre, was also from Guyana, was an adviser there. She and Bridget Davies with a group of local women, had the idea of starting a lunch club for West Indian Elders. This later became the Pepper Pot.
In 1991 my husband Andre became the Director of The Pepper Pot.
﻿
ENID: Trinidadian artist Enid Richardson painted this picture when she was in her 70s. Her work can be seen at The Pepper Pot 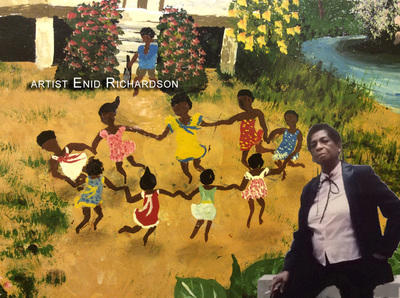 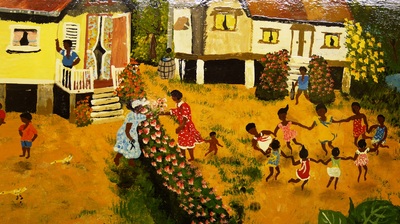 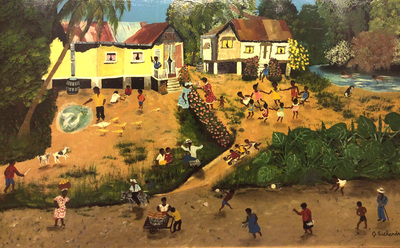 Enid, a self taught artist painted from memory images and scenes from her childhood in Trinidad. She painted them with enamel paints.
Powered by
Powered by